“Believe in Allah and His Messenger, the unlettered Prophet.” [Al-Qur’an 7:158]

Whoever obeys the Messenger, he indeed obeys Allah, and whoever turns back, so We have not sent you as a keeper over them. (Surah An-Nisa, 80)

Allah says, “Let those who oppose his command beware of a trial that might strike them or a painful punishment that might befall them.” [Al-Qur’an 24:63] and “Whoever splits from the Messenger of Allah after the guidance is clear to him and follows other than the path of the believers, We shall entrust him to what he has turned to.” [Al-Qur’an 4:114]

Allah says, “Whoever does not believe in Allah and His Messenger, We have prepared a blaze for the unbelievers.” [Al-Qur’an 48:13]

Allah talks about the unbelievers in the depths of the Fire saying, “On the day when their faces are turned over in the Fire, they will say, ‘Would that we had obeyed Allah and that we had obeyed the Messenger.’ ” [Al-Qur’an 33:66] They will wish they had obeyed when the wish will not profit them. 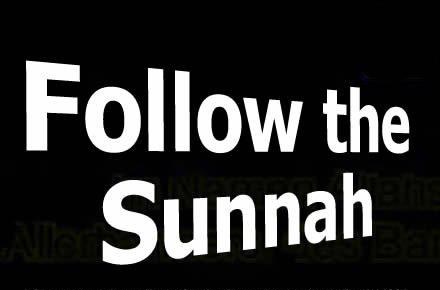 ‘Anas related that the Prophet said,
“Anyone who dislikes my sunnah is not of me.” [Muslim and al-Bukhari]

Allah also says, “You have a good model in the Messenger of Allah for one who hopes for Allah and the Last Day.” [Al-Qur’an 33:21] Muhammad ibn ‘Ali at-Tirmidhi said, “To take the Messenger as a model means to emulate him, follow his sunnah and abandon opposition to him in either word or action.”

The Sunnah is the explanation of the Qur’an.In the Qur’an, it has been mentioned that the prophet removes heavy burdens, makes rules, teaches the ummah (society) the open and hidden meanings of the Qur’an. As a matter of fact, when we look at the practices of Sunnah, we see that the prophet of Allah gave His companions a lot of information about numerous subjects. This information was then interpreted by scholars of the time, continued to be practised in daily lives and has passed on to us generations to generations.

Allah says:
“Certainly Allah conferred a benefit upon the believers when He raised among them a Messenger from among themselves, reciting to them His communications and purifying them, and teaching them the Book and the wisdom, although before that they were surely in manifest error.” (Surah Al-e Imran, 164)

We can give “salat” (ritual prayers) as a clear example to understanding the commands of the religion. As well known, in Islam, performing salat 5 times a day is an obligation and there are verses giving general information about how to perform it, how to perform ablution (wash). However, we can understand how exactly we should perform prayers only by looking at sunnah. Because there is no detailed information in the verses about the way of praying, what to say in prayer, the way of man and woman’s performing the prayer, the degree of importance of the prayers, the details of ablution, what nullifies ablution. We can learn such details only by looking at Sunnah of the prophet.

As another example, we can mention the suggestions of the prophet about Friday and the things He said about Friday prayer. Beside the subjects such as speaking that which is best, cleanness, foods, modesty, there are verses in the Qur’an about obligations such as fasting, ablution and hajj (pilgrimage). However, there is no detailed information about those worships in the verses. We learn the detail information about how to perform these worships from the interpretations of the scholars about the words and habits of the prophet.

“Surely We have sent you as a witness and as a bearer of good news and as a warner, That you may believe in Allah and His Messenger and may aid him and revere him; and (that) you may declare His glory, morning and evening. Surely those who swear allegiance to you do but swear allegiance to Allah; the hand of Allah is above their hands. Therefore whoever breaks (his faith), he breaks it only to the injury of his own soul, and whoever fulfils what he has covenanted with Allah, He will grant him a mighty reward.” (Surah Al-Fath, 8-10)

Allah is the teacher who teaches us through Muhammad Sal Allahu alaihi wasallam.
“Allah decrees what He wishes by the tongue of Muhammad… ”
(Sunaan Abu Dawud, 3.41.5112)

Previous: Sajdah is only for ALLAH
Next: World is indeed a prison