World is indeed a prison

This world is indeed a prison because it is a period of test for the believers.

Jannah is the rewarding result.The door we all want to unlock to go in is indeed the door of Jannah ul Firdaus.

Allah says:
“Or think you that you will enter Paradise without such (trials) as came to those who passed away before you? They were afflicted with severe poverty, ailments and were shaken.” (2:214)

“Indeed, Allah has purchased from the believers their lives and properties (in exchange) for that they will have the garden (of Paradise)…”
[Surah At-Taubah [9:111]

Abu Huraira reported: The Messenger of Allah, peace and blessings be upon him, said, “The world is a prison for the believer and a paradise for the unbeliever.”
Source: Sahih Muslim 2956
Grade: Sahih (authentic) according to Imam Muslim.

Allah says: “Let not then this present life deceive you” (Quran, Surah Fatir: 5).

Shariah is the islamic law Allah wants us to follow, this is how Allah test our faith. 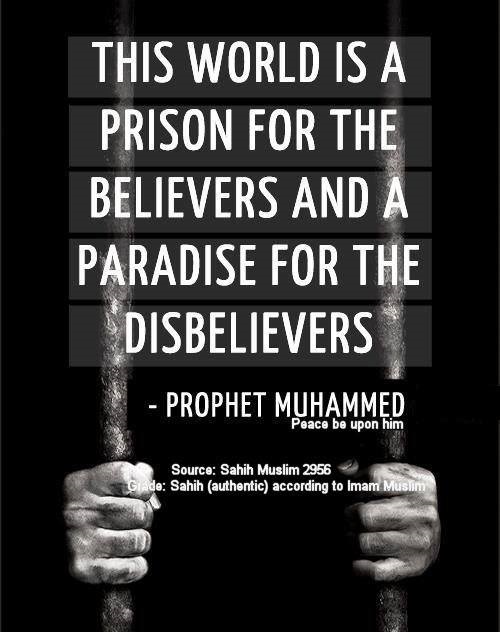 Islam governs our lives, and we are happy for it to do so. As, if our lives were left within our own hearts desires we would truly be lost. Let’s us be happy to live according to Islam.

Abu Hurayra said, “I heard the Messenger of Allah, may Allah bless him and grant him peace, say, ‘This world is cursed, and everything in it is cursed, except for the remembrance of Allah Almighty and obedience to Him, and a scholar or a teacher.'” [at-Tirmidhi]

The way a prisoner doesn’t make his home the prison the believer is the same, where by he never sees this world as his home, but as a temporary dwelling full of trials until he reaches his final home of Jannah.
When a believer dies and departs from this world, he feels himself like a prisoner who was released to go freely on the spacious earth.

Allah says: “Truly, the life of this world is nothing but a (quick passing) enjoyment, and verily, the Hereafter that is the home that will remain forever.” (Quran 40:39)

The Messenger of Allah (peace be upon him) said:
“My similitude and that of the life of this world is that of a traveler who took a rest at mid-day under a shade of a tree and then left it.”
(Ahmad, at-Tirmidhi, Ibn Majah and al-Hakim)

“Be in this world like a stranger, or a wayfarer.” (Bukhari)

Allah chooses Islam for us as a better way of live, learn to be happy within the limit told by Allah. This world is not permanent, it is here we try to strive for Jannah.

Allah says:
“And the life of this world is nothing but play and amusement. But far better is the house in the hereafter for those who are Al-Muttaqun (the pious). Will you not then understand?” (Quran, Al-An’aam: 32)

“Indeed, those who do not expect the meeting with Us and are satisfied with the life of this world and feel secure therein and those who are heedless of Our signs.” (Qur’an, 10:7)

Read:
Rabbana a tina fid dunya hasanataw wa fil a khirati hasanataw wa qina aza ban naar. (2:201)
Oh Lord! Grant us good in this world and good in the hereafter and save us from the punishment of the hell fire.

Do not be upset if this world is prison, strive for the hereafter.
Allah says:”…Verily in this are Signs for everyone who patiently perseveres and is grateful” [ash-Shura 42:33]

“Only those who are patient shall receive their reward in full, without reckoning.” (39:10)

May Allah give you all the courage to strive for Jannah.
In shaa Allah we shall meet there.
~*

Previous: Follow the Sunnah
Next: Can I pay up these bills ?