…which the Muslims won through the complete help of Allah Subhanhu Wa Ta’ala in the blessed month of Ramadhan, 2 AH. Move to the entire entry to read a brief summary of the happenings of the notorious Battle of Badr. 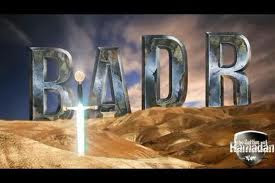 Life in Makkah was becoming unbearable for the Muslims. The disbelievers were not allowing them to worship Allah, and were torturing them. The Prophet, sallallaahu alayhi wasallam, decided to migrate with his companions to Madinah, fleeing the oppression of Quraysh. They left Makkah in secret, leaving behind their property and their money.
The disbelievers in Makkah were very annoyed by this successful migration. They then confiscated everything the Muslims left in Makkah, and used their moneys to equip their caravans with goods to be sold in Syria.
Back in Madinah, the Muslims were thinking of a way to get their property back. “We cannot accept this injustice anymore, we must get our money back by any means,” one of the companions said. “Let us intercept one of their caravans and get back some of our wealth,” another companion said. However, at that time, the Muslims were weak, and not well equipped to fight the Quraysh tribes. Moreover, the Prophet, sallallaahu alayhi wasallam, would not take such an action until Allah allowed him to do so. Then one day he received the revelation from Allah, saying: “To those Muslims against whom war is waged, permission is given to fight, because they are wronged, and surely Allah is Able to give them victory.” [22:39]. When the Prophet, sallallaahu alayhi wasallam, got the news that a caravan of the Quraysh tribe was coming from Syria full of goods, in the direction of Makkah, he addressed his companions saying: “Here is the caravan of the Quraysh tribe carrying their wealth with it. Go and intercept it for Allah may give it to you as a booty.”
On the eighth day of Ramadhan, the Muslims gathered a small army comprised of 314 men, 70 camels and only two horses. The Prophet, sallallaahu alayhi wasallam, and his companions took turns riding the camels, marching towards Badr. Most caravans stop at Badr, a location halfway between Makkah and Madinah, to drink from the wells and rest their mounts. Abu Sufyan, the leader of the caravan coming from Syria, was informed that Muhammad and his army had set out to intercept him. He dispatched a messenger to Makkah to tell his people of the imminent danger and to call upon them to come to his help. When the messenger of Abu Sufyan reached Makkah, he turned the saddle of his camel upside down, tore his clothes, and shouted, “The caravan! The caravan! Your goods with Abu Sufyan has been intercepted by Muhammad and his companions. It may be too late to save it. Help! Help!”
The news hit the people of Makkah like a thunderbolt. The disbelievers were greatly shocked. Immediately, they decided to prepare a great army to fight the Muslims. All the tribes supplied men, money, and equipment. They gathered an army of 1300 men strong, 100 horses and a great number of camels. They marched forth toward Badr, boiling with anger. 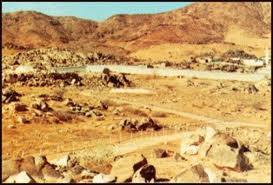 Meanwhile, Abu Sufyan reached the vicinity of Badr. There he met a Bedouin whom he asked if he had seen an army. The man answered that he came across nobody except two riders on the hill nearby. Abu Sufyan rushed to the place, there he found a datestone which he examined carefully. He exclaimed: “By Allah! This is the feed which the people of Madinah give to their animals.” He knew that the Muslims were not far away. He changed his course towards the west coast, escaping the Muslim army. When he was sure he was completely out of danger, Abu Sufyan dispatched a messenger to inform the disbelievers of Quryash that he no longer needed their help.
However, Abu Jahl, a sworn enemy of the Prophet, sallallaahu alayhe wasallam, refused to return to Makkah and insisted that the army march up to Badr. He said with great arrogance: “By Allah, we will not turn back until we get to Badr. There we will stay for three days, slaughter animals, have a feast, drink wine and have the girls sing for us. All of Arabia shall hear of our march, our strength and shall afterwards respect us. Let us march on!” Their army was indeed the greatest ever witnessed by Arabia. Abu Jahl saw in this a golden opportunity to humiliate the Muslims, and if they engaged in fighting, to exterminate Muhammad and his companions, and with them the whole religion of Islam. 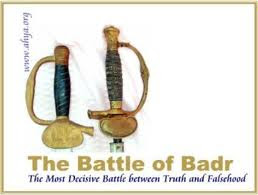 Previous: Ramadan, the Month of Fasting
Next: The Battle of Uhud