Ramadan, the Month of Fasting

The Meaning of Ramadan

Ramadan is a special month of the year for over one billion Muslims throughout the world. It is a time for inner reflection, devotion to God, and self-control. Muslims think of it as a kind of tune-up for their spiritual lives. There are as many meanings of Ramadan as there are Muslims.
The third “pillar” or religious obligation of Islam, fasting has many special benefits. Among these, the most important is that it is a means of learning self-control. Due to the lack of preoccupation with the satisfaction of bodily appetites during the daylight hours of fasting, a measure of ascendancy is given to one’s spiritual nature, which becomes a means of coming closer to God. Ramadan is also a time of intensive worship, reading of the Qur’an, giving charity, purifying one’s behavior, and doing good deeds.
As a secondary goal, fasting is a way of experiencing hunger and developing sympathy for the less fortunate, and learning to thankfulness and appreciation for all of God’s bounties. Fasting is also beneficial to the health and provides a break in the cycle of rigid habits or overindulgence. 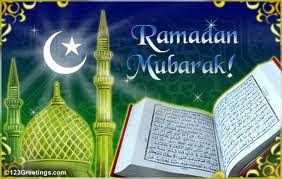 While voluntary fasting is recommended for Muslims, during Ramadan fasting becomes obligatory. Sick people, travelers, and women in certain conditions are exempted from the fast but must make it up as they are able. Perhaps fasting in Ramadan is the most widely practiced of all the Muslim forms of worship.

Ramadan is the ninth month of the Islamic calendar. The much-anticipated start of the month is based on a combination of physical sightings of the moon and astronomical calculations. The practice varies from place to place, some places relying heavily on sighting reports and others totally on calculations. In the United States, most communities follow the decision of the Islamic Society of North America, which accepts bonafide sightings of the new moon anywhere in the United States as the start of the new month. The end of the month, marked by the celebration of Eid ul fitr, is similarly determined.
The daily period of fasting starts at the breaking of dawn and ends at the setting of the sun. In between — that is, during the daylight hours — Muslims totally abstain from food, drink, smoking, and marital sex. The usual practice is to have a pre-fast meal (suhoor) before dawn and a post-fast meal (iftar) after sunset.The Islamic lunar calendar, being 11 to 12 days shorter than the Gregorian calendar, migrates throughout the seasons. Thus, since Ramadan begins on January 20 or 21 this year, next year it will begin on January 9 or 10. The entire cycle takes around 35 years. In this way, the length of the day, and thus the fasting period, varies in length from place to place over the years. Every Muslim, no matter where he or she lives, will see an average Ramadan day of the approximately 13.5 hours.
The last ten days of Ramadan are a time of special spiritual power as everyone tries to come closer to God through devotions and good deeds. The night on which the first verses of the Qur’an were revealed to the Prophet, known as the Night of Power, is generally taken to be the 27th night of the month. The Qur’an states that this night is better than a thousand months. Therefore many Muslims spend the entire night in prayer.During the month, Muslims try to read as much of the Qur’an as they can. Most try to read the whole book at least once. Some spend part of their day listening to the recitation of the Qur’an in a mosque.
Since Ramadan is a special time, Muslims in many parts of the world prepare certain favorite foods during this month.
It is a common practice for Muslims to break their fast at sunset with dates (iftar), following the custom of Prophet Muhammad. This is followed by the sunset prayer, which is followed by dinner. Since Ramadan emphasizes community aspects and since everyone eats dinner at the same time, Muslims often invite one another to share in the Ramadan evening meal.
Some Muslims find that they eat less for dinner during Ramadan than at other times due to stomach contraction. However, as a rule, most Muslims experience little fatigue during the day since the body becomes used to the altered routine during the first week of Ramadan.
Muslims use many phrases in various languages to congratulate one another for the completion of the obligation of fasting and the ‘Eid-ul-Fitr festival. Here is a sampling of them:
Did you like this? Share it:
Tweet

Previous: Shawwal ( 10th month of the Islamic calender )
Next: History of 17 Ramadan ( The day of Badr )