Shawwal Is the tenth month of the Islamic Calendar.

Meaning of the word Shawwaal:- Uplift/breakage.  Before Islam, Arabs believed that any marriage held in Shawwaal would always turn out to be unsuccessful.  Hence, the month deprived the above metioned meanings, however the superstitious belief was later abolished.
The month Shawwal:- From the months of Hajj, Shawwaal is the first of them.  The first day of Shawwal is Eid-Ul-Fitr and also the day when sins are forgiven.
Six fasts of Shawwal:- In the month of Shawwal it is Sunnah to keep six fasts, as narrated in the following Hadith by Abu Ayyub Ansaru (Radi Allahu anhu) that the Beloved Prophet (Salla Allahu ta’ala alayhi wa aalihi wa Sallam) has said, “If one throughout his life keeps the fasts of Ramadan and keeps six consecutive fasts in Shawwal it will be as though he has kept a whole life time of fasts, and if one keeps the six consecutive fasts for one Shawwal month it will be as though he has observed fast all year round.” (Muslim) 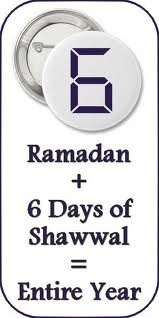 The fast that is observed in the month of Shawwal earns many rewards. It is declared in hadith-i sharifs:
(Whoever fasts for six days in the month of Shawwal after [fasting in] Ramadan becomes as sinless as the day when his mother gave birth to him.) [Tabarani](Whoever fasts in Ramadan and also fasts for six days in Shawwal is considered to have fasted for a year.) [Ibn Majah]

(The fast of Ramadan is equivalent to 10 months. The 6 fasts that are observed after Ramadan are equivalent to 2 months. Thus, one attains the reward of fasting for a year.) [Ibn Huzayma]

Some scholars state that it is better to observe the 6 fasts immediately after Ramadan without delay. It is permissible as well to observe them intermittently. One should observe them with the intention of make-up (qada) fasts. When one keeps voluntary or make-up fasts in the month of Shawwal or at other times, it is much better to keep them on Mondays and Thursdays. Two hadith-i sharifs say:
(Deeds are presented on Mondays and Thursdays. I want my deeds to be presented while I am fasting.) [Tirmidhi]

(I fast on Mondays and Thursdays because sins are forgiven on these days.) [Muslim]

(The gates of Paradise are opened on Mondays and Thursdays.) [Muslim]

Previous: Importance Of Namaz/Salaat
Next: Ramadan, the Month of Fasting