We should know about prophet Muhammad (sm)

Who is Muhammad that is followed by more than One billion Muslims?

Is he a venerable scientist?

Is he a popular prince?
Is he a sophisticated Prime Minister ?
Is he a fair king?The answer is :: NoHe is greater than all of those . He is the Messenger of Allah

Muhammad peace and blessing be Upon him received the message from Allah 1400 years ago to call all mankind to follow the true path, no matter where or when; no matter if white or black, his message is for all.

Who is Muhammad peace be upon him ?

Is he a terrorist, as said by the Western media, or is he the brave warrior who won most of his battles against the enemies of Islam, or is he the genius who resolved all cases and troubles between the tribes ?!

He is the one who protected our Rights. 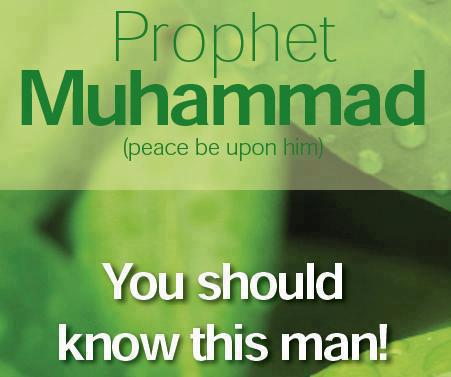 He protected the relations between neighbors

He established the relationship between Muslims and Non-Muslims

He prevented injustice and called for justice, love, togetherness and cooperation for the best.

He called for helping the needy, visiting the patients, love and exchanging advises between people.

He prohibited bad manners such as steeling, lying, and murdering .

A Muslim doesn’t commit a crime

A Muslim doesn’t harm his neighbors

A Muslim obeys his parents and helps them

A Muslim is kind to young and elderly people, to women and to weak people.

A Muslim doesn’t torture humans or even animals

A Muslim loves his wife and takes care of his children and show mercy towards them until the last day of his life.

Every Muslim loves Muhammad (peace be upon him) more than himself and more than everything in his life.

Before judging a person be neutral and ➮ ➮
1-Listen to this person, and follow his doings.
2-Compare his ideas and teachings with what is acceptable to the mind and heart.
3-If you think that his thoughts are right, compare them with his doings; is he applying his teachings?
4-If he is applying his teachings and sayings, so he is for sure right and one must believe him.

At the end you will get a clear answer for all confusing questions and you will know for sure : Who Muhammad peace and blessing be upon him really is ..

Previous: Can I pay up these bills ?
Next: The Excellence of knowledge;